Rules of the Road

I have walked the highway, but like life: It often walked me.

Still there are things worth remembering.

* You can never carry enough water. Certainly cold water and better yet ice cold water. Friends tell me, "Carry a refrigerator." I wish I could.

Even carrying plenty of water is not always possible. My pack runs 20+ pounds without H2O. Every liter of H2O adds two pounds. Dehydrated water would be good addition, but not yet perfected. I may have work on that invention.

My pack began overweight. Andy Horujko, world champion walker whom I met on my first walk as we ferried across Lake Michigan, told me, "You're carrying too much in your pack. Seventeen pounds." Oy. He was probably right, but ....

* Water and trees are favorite commodities on the road. Water to drink, rinse in and to cool my feet. I relish the running water of a rivulet, ditch or canal. I took more than a few "baths" next to the highway in one or the other watery element.

How grand when the water is cool to cold. But, I will take water almost any way I can get it.

* Trees provide shelter from the heat and comfort on rest breaks. When I am out on the road for the night, I most often try to find a tree - preferably evergreen - to park my gear and flag and body for sleep.

I know that when I walk I absorb energy - chi - from the sky and earth and sun. But, I do believe trees and grasses have their own particular modifications of vital force to share with those in the outdoors.

Interestingly while staying with my friend Dorothy in Atchison KS, I found and read a copy of the book called Earthing. A worthwhile effort which reminds us that we have separated ourselves from nature and the Earth in specific.

Simply taking the time and energy to ground oneself can be not only refreshing but also healing. Read the book or just take a gander at http://www.earthing.com/ Healing and improved health can be as near as some fresh air, sunshine, and contact with the living Earth. Walking may add benefits, but just getting in contact with Mother Earth can have grand effects.

* Eating on the run can be a challenge. But, many evenings ago in Wyoming ... I had stopped on the side of the road to rest and get into the shade made by some huge alfalfa bales. After some minutes, Tammie Nichols saw me and drove over in her ATV to visit.

We talked for a time about all kinds of things: family, ranching, football, walking, water. She tried to suggest that I could camp nearby on her property. I said, "I am walking another 10 miles."

We parted after she told me about the next irrigation watering hole where I could cool my feet. I found the spot and enjoyed the brief respite.

A few miles later, a man in a pickup appeared. He said, "I'm the husband of the woman, Tammie, you met a few miles back. These are for you."

THESE were a hamburger and an apple presented to me by Mr. Nichols. I knew little more than to ask for Mr. Nichols's name - Dale - and say "Thank you very much."

I am generally vegetarianesque, but have made several exceptions on this Walk and others. I have had hamburgers, fishwiches, turkey sandwiches so far. No elk or bear meat, yet.

I have learned or attempted to live like the Romans, "when in Rome."

* Weather changes quickly. Like in Montana, people are told, "If you don't like the weather, wait 20 minutes."

Patience is a great virtue. Patience with nature an equally valuable one.

* Nature is not only changeable. It is also magical.

I have run into a whole range of weather variables on the trip. Fortunately, I was able to wait expectantly on rain, wind, and penetrating sun until the Shift came. Voila!

* People do nice things without asking. See blog on the Kindness of Strangers.

Just as Nature can be giving, nurturing and comforting.

Human beings do wonderful things, sometimes tiny ones and sometimes bigger ones to help neighbors and strangers.

The Sun pours its light equally on friends and adversaries. We need to learn to do the same.

Be Well - In Amity, Unity and Imagination. 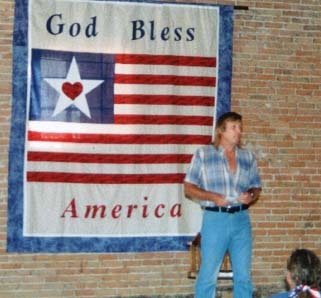 Well, there is not much to report.

My long-time friend James Francis Kinerk has been ill and doctoring for many months. When I was planning my Walk, I thought I should head in his direction to catch up on our friendship and try to lend him a hand.

A few days before I started on the road on August 1, he took a turn for the worse and had himself admitted to the University of Kansas Medical Center. He has been in the hospital or nursing home ever since. During the interim, a host of problems appeared or were diagnosed. At one point, the doctors thought he might have just hours to live. Then, he perked back up into a better state.

I stayed in JIm's travel trailer in Baldwin KS, some 40 miles from the nursing home where was staying at the time. Having no transportation of my own, I was only able to see him on two occasions over my six weeks in the area. We discussed some possibilities, but ...

The wheels of medicine sometimes turn rapidly. Other times, they creak so slowly.

After six weeks, I got enough hints from several angles to suggest that JFK's medical involvements might go on indefinitely and my help might not be either warranted or accepted.

So, I turned back to the west and caught a ride to Montana with my friend Charlotte who was returning from an East Coast trip.

I have had no communications from or on Mr. Kinerk for a week despite several attempts on my part.

So, I have to be satisfied that I made a sincere effort to lend a hand.

Nothing ventured, nothing gained.

I have left out details on purpose. I can respond to particular queries.

Send comments or questions to theportableschool@gmail.com. 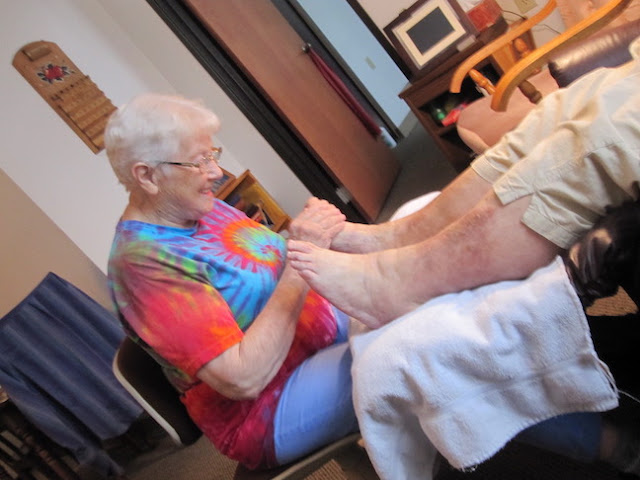 I made it a few days early to Kansas thanks to my friend Charlotte who passed through Wyoming and Nebraska on the way to the East Coast. When she decided to drive out along Highway 36 through Saint Joseph, Missouri, into Illinois and beyond, I resisted giving up the Walk for some minutes.

Although I was quite ready for a rest, it took me some time to give up walking into Kansas.

Atchison, Kansas, was just a few miles from her path, so we tracked in to meet my long-time friend Dorothy. I knew Dorothy and her husband Reid (recently deceased) Barnett from my Fort Riley and their Manhattan, Kansas, days.

Reid and Dorothy introduced me to A Course in Miracles and their version of channeling. We strayed far and wide over the years. But, a mutual friend got us in touch a few years ago before Reid departed the world at age 86.

Dorothy had her 89th birthday on August 25. We were able to celebrate her occasion again yesterday by going to her favorite restaurant for Chinese buffet.

Dorothy lives at Santa Fe Place in the center of town. She still does Reflexology work and studies The Disappearance of the Universe.

I have a few photos to share at a later date. Added above.

I am staying with Dorothy of OZ until JFK's sisters in Kansas City are ready for the Northern Walker to appear.

Send comments to theportableschool@gmail.com.
Posted by Dr Bob at 8:38 AM No comments: