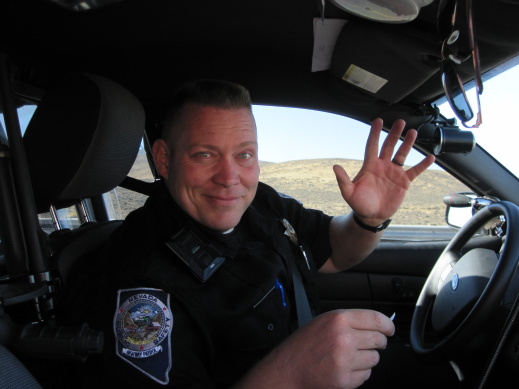 There is a Great Teaching which goes,
To Follow the Path, You Must Become the Path.

Maybe at this point in my life, I am beginning to understand the meaning of this teaching a bit better. Enough so to write a brief article about it.

The Portable School and I are a few months back from walking across parts of Montana, Idaho, and Nevada - and already planning another excursion for this summer. At the same time, we are reflecting on last summer's path which brought numerous experiences and learning opportunities.

I am reminded that several people were concerned for my health and safety along the way. I suspect numerous prayers were sent my way. Before I left, I was offered a gun to carry which idea got nowhere. I didn't carry one in Vietnam and figured I didn't need one in the USA.

My friend Audrey Snow was worried that I might "get knocked over the head" for some reason, especially by people of foreign extraction. My mother would have thought that, too. Audrey was also concerned about me picking up things out of the ditch and sometimes partaking thereof. I have the nickname of Still Edible in some parts of the country.

I did indulge a few times. I tried a few raw potatoes and a sugar beet which had fallen off trucks here and there during harvest season in the great state of Idaho. They were fairly tasty. Salt and pepper would have helped.

I also was lucky to quench my thirst with a half-full bottle of cool chocolate milk that was sitting next to an empty on the side of the road outside of Ashton, ID - just waiting for me. That was kind of like the lone apple on a tree on north side of Livingston, MT, that was lingering on its stem ready for me to pick it on the way to town.

I wasn't sick for a moment of 35 days on the road. Tired but not sick. No injuries. Not even a twisted ankle. No mayhem. No problems.

I met with the Law on four occasions. Those were the closest times I came to a gun and bullets. Three of the four officers were keen and kind and caring about my welfare. Boyle, Christensen, and Scott made me feel good about law enforcement officers. The latter stopped to visit me twice in my latter miles in Nevada, to offer help and a ride, if I would accept. I wasn't ready.

My fourth experience with a policeman didn't go quite so well. And, I do believe that it was largely my fault. Something to learn. The officer, whose name I conveniently have forgotten, visited me as I was taking a break next to a big evergreen tree on the edge of a farm in the middle of Idaho.

He made it quite clear that I should move on. I thought that I was just resting my feet in broad daylight with my flag in brilliant display. But, he didn't walk much as one could tell by his physique. But, that was part of my problem. I did judge him for his figure and rather slow manner.

He had to take my driver's license twice to verify my identity. He said, "You need to move along."

I said, as I was putting socks and boots back on after my brief respite, "I assure you I am continuing on down the road." He insisted on waiting for my departure.

Next time, I will do better with all policemen. Although 3 of 4 knew I was no threat, one didn't. I needed to understand where he was coming from. For my benefit as well as his.

• "We are always meeting self." This favorite Edgar Cayceism is "spot on." The universe, karma, fate, the path always lead us to meet ourselves, however far or near we move from home base. We cannot escape ourselves.

We meet ourselves in others, in events, in problems and illness, in triumph and tragedy. We also meet ourselves at home and on the road, in the news programs we turn to and the movies we watch, the songs we listen to. How could it be otherwise?

We even meet ourselves in the form of law officers on the highway. Small, medium and large ones. Quick and slow. Friendly and otherwise.

• We also have the potential of meeting Self. Wherever we go, there is the Divine, God, Goddess, Christ, Krishna, Buddha staring us in the face. If we see the enemy, the adversary, the infidel, the heathen, Satan, we are still only looking at our selves.

Shouldn't we, therefore, be looking for the best in the world and in others? Then, we are certainly more likely to find it in ourselves as well.

Surely, such a way of living will make the Path easier for everyone. Since everyone is part of our bigger Self, what we give out will indeed come back to us - and probably magnified when it does. We can expect to see the return somewhere down the long and winding Road.

PS Lessons will constitute a series which continue over several weeks. If you want to follow them, check in at http://theportableschool.com every week or send a note to theportableschool@gmail.com and ask to be put on the emailing list.

PPS I have already posted comments from a number of readers on this first Lesson at the website.
Posted by Dr Bob at 2:42 PM No comments: