You're A Good Man, Mr. Dylan

I have had the great good fortune to meet many fine, friendly people on my walking expeditions. I encountered several of them Sunday before last between Roundup and Musselshell, MT.

Part of the idea for Walking the Country is to get to know folks - usually older ones - here and there along the way. And, that is what generally happens. But that Sunday, I unexpectedly got to spend time with some "younger folks." And, it turned out to be a precious moment initiated by Mr. Dylan. I had been resting for a time under some trees several yards from Highway 12 near mile marker 182. I had noticed some ATV traffic coming and going, but had paid little attention.

Of a sudden, there was a boy standing next to the Flag and Buggy, saying, "What is this thing?"

I unthinkingly yelled out, "That's mine," and returned to my nap.

When I wandered over to the Buggy en route to the nearby river some minutes later, the youngster had disappeared. But, it seemed that he was responsible for the bottle of water I found waiting there for me. "How kind," I said to myself.

I proceeded to a nearby bridge which crosses the Musselshell River. I stared down at the water looking for a place to rinse and rest my weary feet. There was no easy spot, but I thought I could manage to get to one on the other side. I passed over the bridge and picked my way down intending to find a log or rock to sit on near the water's edge. Instead, I slid down an embankment collecting mud on the length of the left leg of my blue jeans.

I sat for a moment reflecting on my predicament when a voice came from above.

No, it wasn't God. Or, maybe it was. But, in the form of a young boy who inquired what I was about. He quickly told me that he had a "much better waterhole."

Dylan, whose name I soon learned, invited me to ride with him on his ATV to his special place. "It's only two minutes away."

I said, "Sure. Thank you very much. But, I need to leave a note at my rig. I'm expecting friends to stop by on their way home." 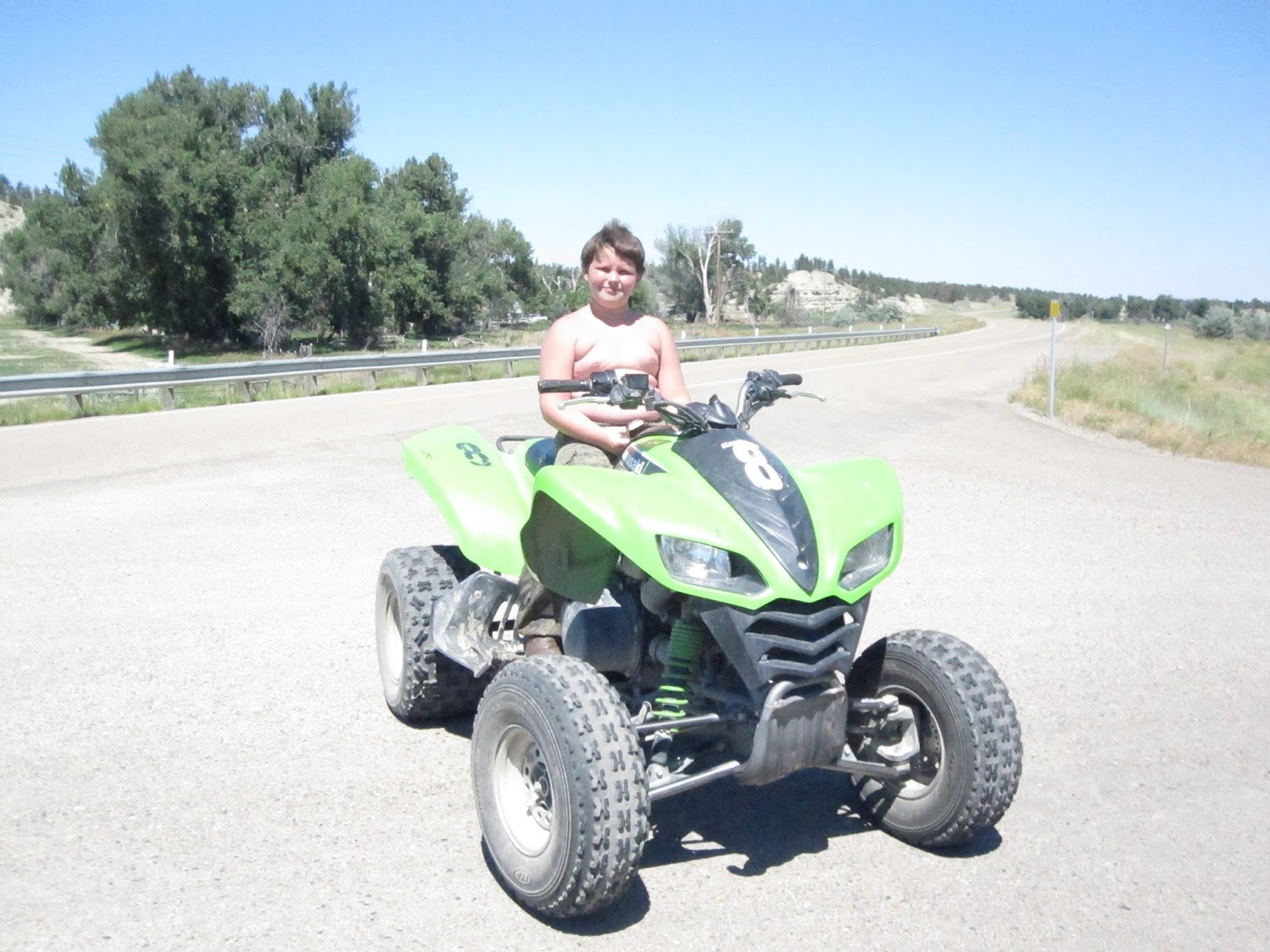 Dylan gave me a quick lift - after I stretched and stretched to get on the ATV behind him. When I dismounted, I walked a few yards to the Buggy to find more water - several bottles, a can of cream style corn, and the remains of a bag of Cheetos. "Someone is looking out for me, and I have a good idea who it may be."

I quickly scribbled a note for Duane and Audrey - who didn't appear until the next day in Melstone. I returned to the ATV with thanks to Dylan and stretched again to get over the wide saddle.

And, WE'RE OFF. Dylan put his foot to the pedal and sped down the gravel road. It seemed like a long two minutes, but we eventually turned across a pasture and onto a landing area which made for a Musselshell River Beach.

Lexis (sister) and Josh (friend) were paddling in the turbid waters with sandstone rims in the background. They were having a good old time. Dylan quickly jumped in, boots and all. I slowly followed suit sans shoes and just walked around in the water.

I have never been much of a swimmer. I blame that- in part - on wearing thick glasses and seeing quite hazily without them.

Still, I waddled the wide Musselshell pool and laved water over my dirty jeans and sweaty body. It felt grand. A great moment with sky, sun and water.

It was even more grand to see the young people splashing and cavorting with merely an inner tube and water as equipment.

I gathered bits and pieces of Dylan's story. His sister filled in a few blanks while Dylan and Josh made the best of their watery activity.

Dylan (10) and Lexis (11)  live with their mother on a ranch nearby. They go to school in Roundup. But, they obviously relish the country, the fields, and the river. 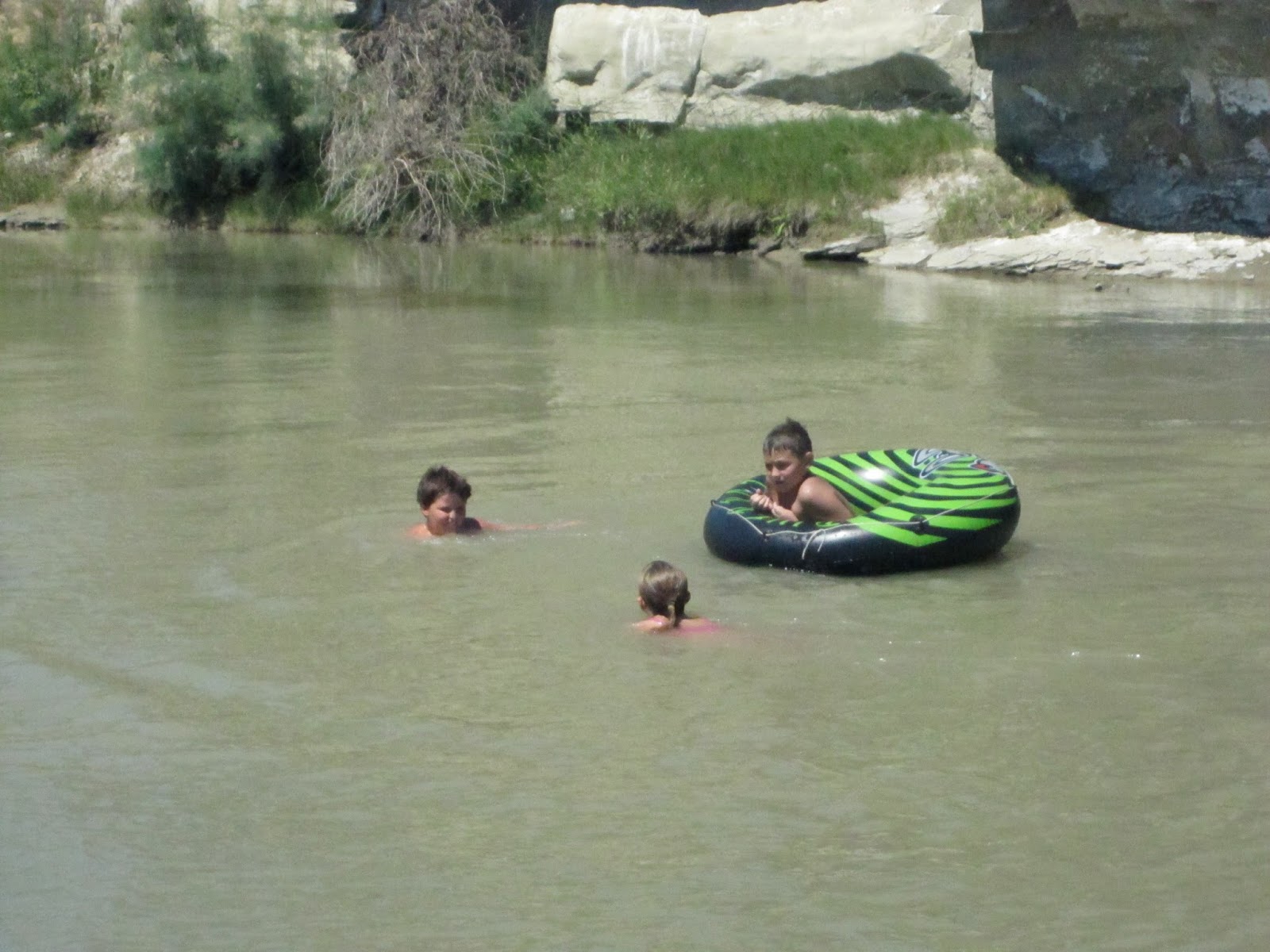 Dylan told me he had been driving an ATV since age 6. He helps with haying and other ranch work as well. He didn't have much to say about school. I imagined that was far from his mind in the middle of summer.

Our play moments went by quickly. After our 90-minute excursion, I asked Dylan to drive me back the Buggy at mile marker 182.

We returned to the ATV. Waving to Lexis and Josh, we retraced the trail back along the gravel road.

I got Dylan's address and phone number, and promised to keep in touch. This is my first effort thereto, although I have shared this story several times over already.

I felt and continue to feel the TOUCH of a 10-year-old boy/man who was persistent and caring, fearless and friendly to a total stranger. Would that more of us could emulate him, looking for the best in others and sharing the best in ourselves.

Parting with my young new friend, the only fitting words I could share were these: 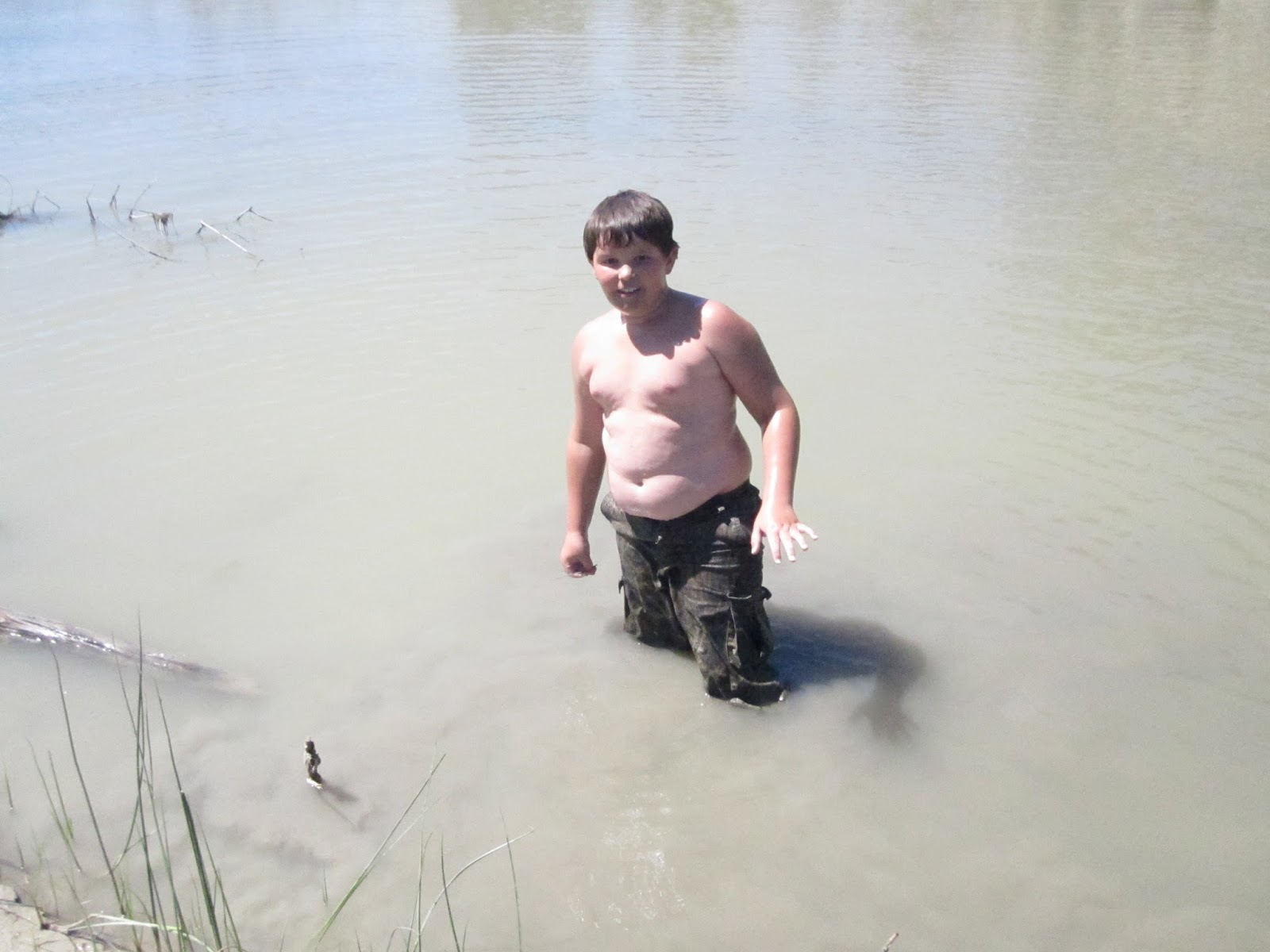 We made full stops at Deadman's Basin, Ryegate, Lavina, Roundup and are resting in Melstone for a few days. Along the way, we have encountered friendly and helpful people, hot days and cool mornings, a few mosquitoes, and some minor adventures.

The first day was marked by my forgetting to bring Fannie the Flag for load-up. A Kolman standard American flag acted as substitute. The day - and the night in a tent at Deadman's Basin passed quickly. The morning brought a visit with the Hammond family, formerly of Lavina - Jenny, Asia, and Dakota. We did some catching up, took photos, and had some hugs. 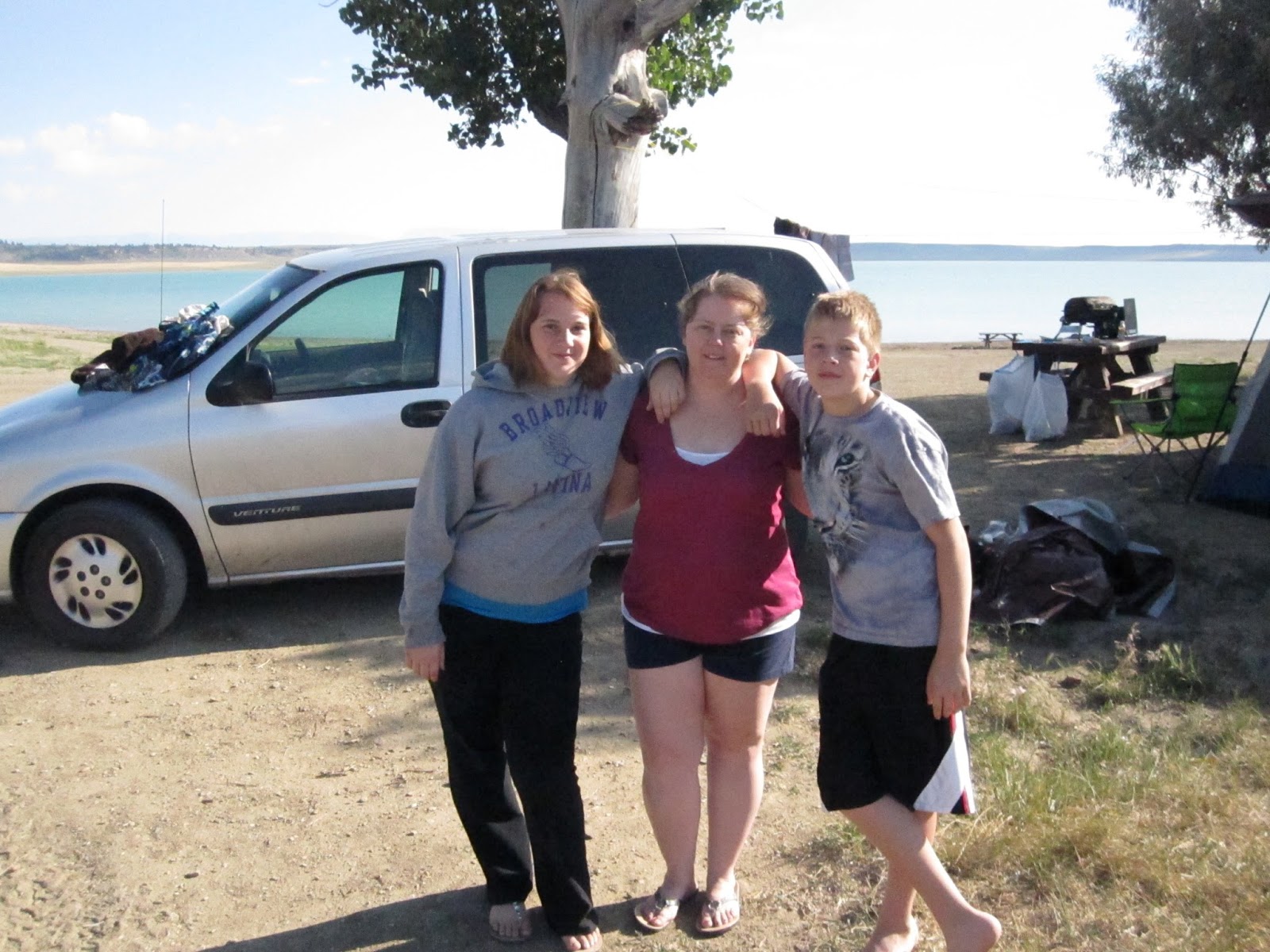 
Day 2 was half the miles than the first thanks to an invitation from Adrie Min. Charlotte McDevitt appeared late afternoon with Fanny, the official Walk Flag. We visited with Leslie Burroughs at the Ryegate Town Hall and joined Adrie and Maria Min for a light and tasty fish dinner. Then, conversation, chickenhouse tour and survey of Adrian's basement projects followed. 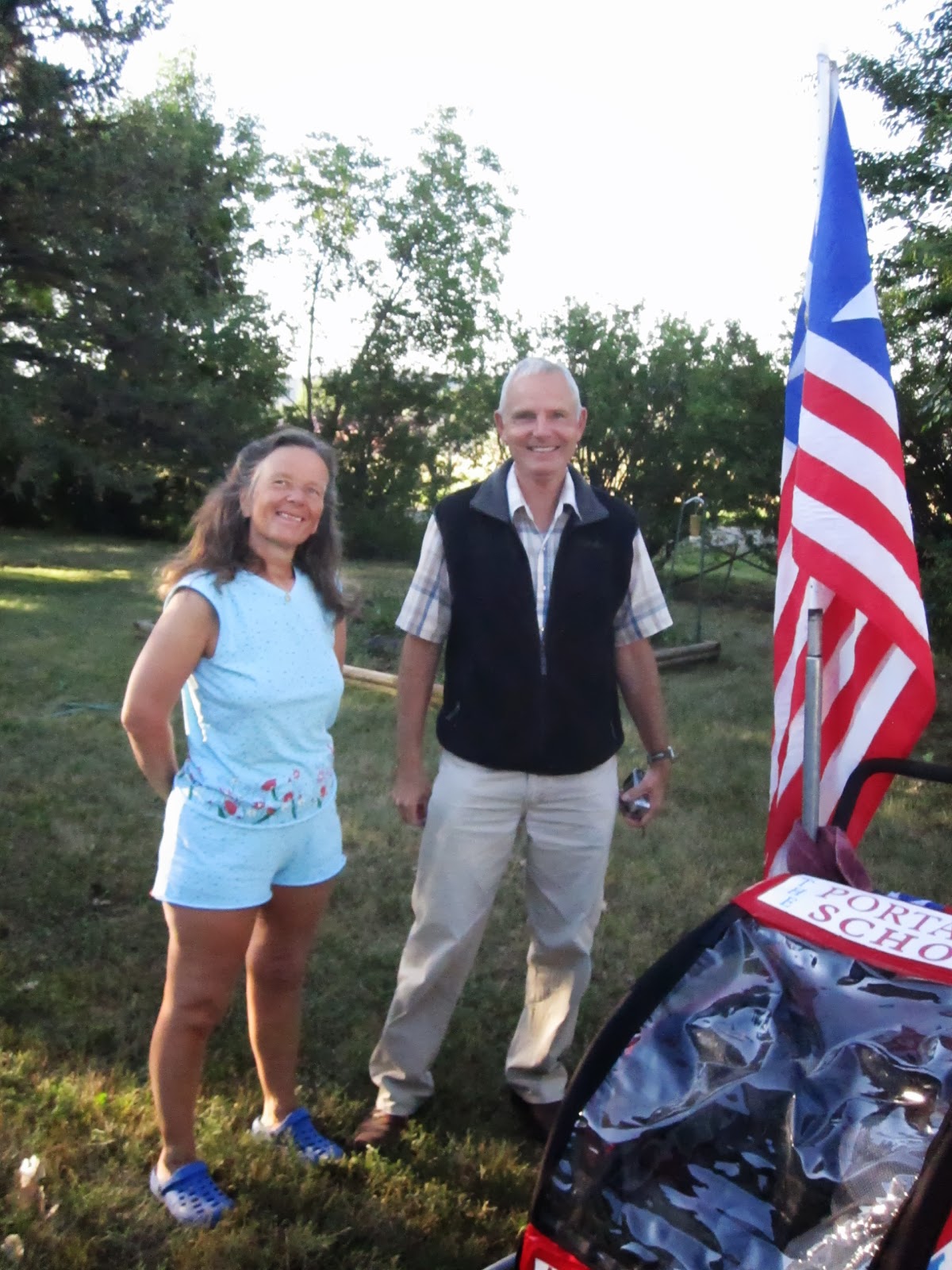 Day 3, I was given an introduction to Maria's audio and video work with the Heart Community. Then, I set off for Lavina. I made a late stop at the former FastGo Gas Station where I visited with Cassidy Boe before passing into town. Few people were home that Friday. I did get to talk with Dick Colberg and Tani McKeever before connecting with Lee and Leslie Burroughs. 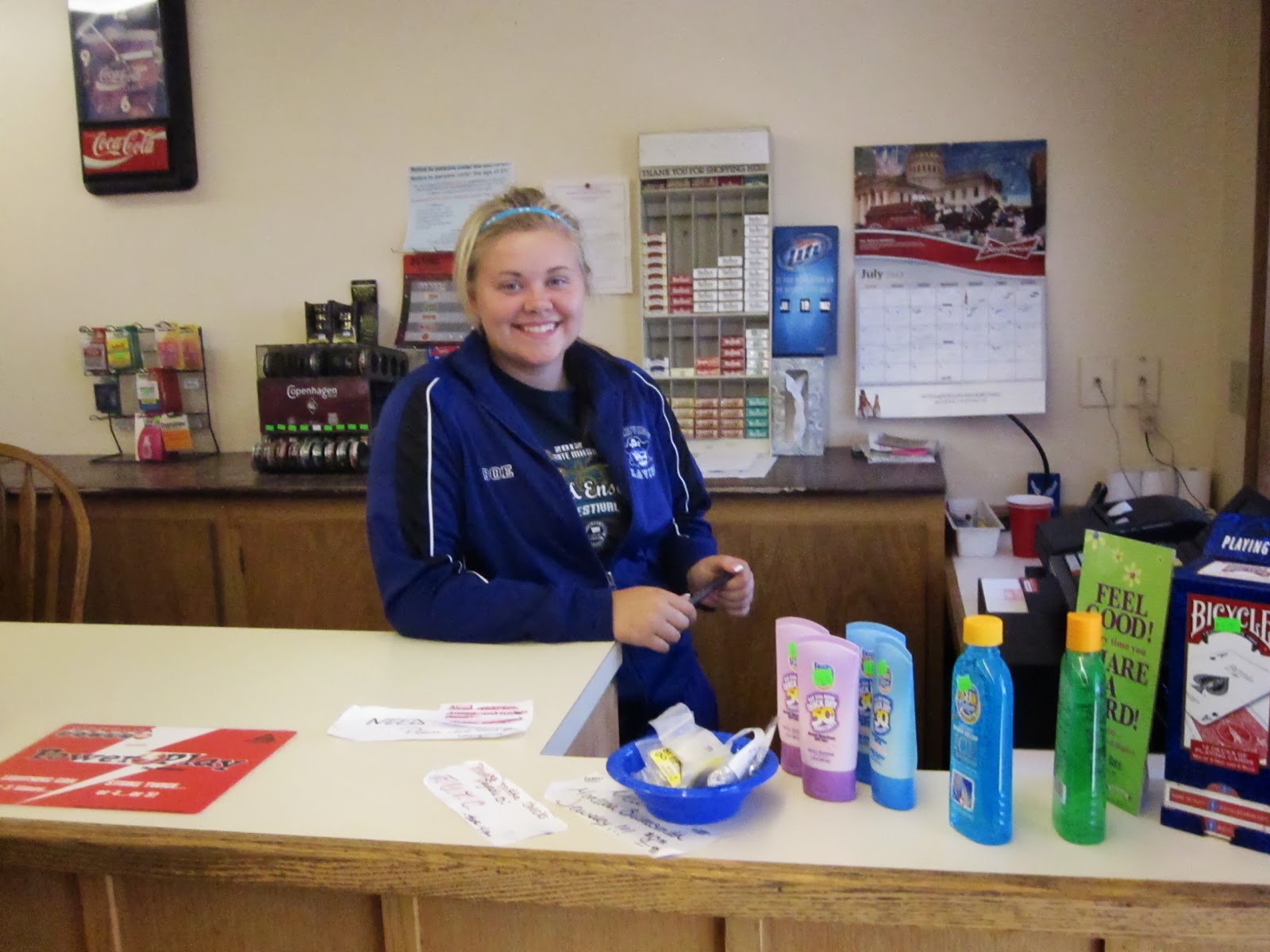 Lee did the cooking and I tried a piece of elk. First ever. I was pleasantly surprised by the cooking and the cook. After dinner, I went with Lee - and Jack, his dog - to their country property while he got some irrigation started. Then, I shared photos from past Walks with Lee. Leslie has seen them before.

I can say that I spent that night in Utopia. The Burroughs home was the original Utopia School. They moved it once to their property west of Lavina and a second time to town two years ago.

It is a wonderful structure, homey, historical and livened with many of Leslie's touches.

Lee made breakfast in the morning and we traded photos before I headed for Roundup.

The Roundup experience should be a post of its own as should the Melstone one.

Many Wishes for Amity and Unity from Roads Less Traveled.

All plans are subject to change. My expedition fits that mold. "Life happens while we make plans."

After emptying my house and camping on its floor last Saturday, I ventured west the next morning with Buggy and Flag. Stopping to see Audrey, Duane and Charlotte, I was encouraged to throw my backpack into the Buggy.

After goodbyes, we trundled down Highway 12 at a good pace. Two miles out, the front wheel was wobbling, the flagpole holder was coming "unglued," and then one of the big tires went flat.

I would have worked on the tire on the side of the road, but figured there were too many other problems about the Buggy that needed to be considered. Turning back toward Harlowton with flag in hand, Charlotte appeared with a breakfast sandwich. She drove me back to town where we waited for Audrey and Duane to return from church.

Then, Jimmy Fisk passed the house in his monster truck. I flagged him down and we went out to bring the rig back to town, but not until he drove me by his prosperous-looking garden.

Duane and Audrey came on the scene. Then, Jim Freeser appeared to help patch the tire.

For a time, with suggestions from the Swickards and Ward Beley, the intention was to build a totally new conveyance for the trip. One larger and more substantial to carry food, water and gear across the miles of prairie and desert again. Dave Waldner at the Duncan Hutterite Colony agreed to help with the project. 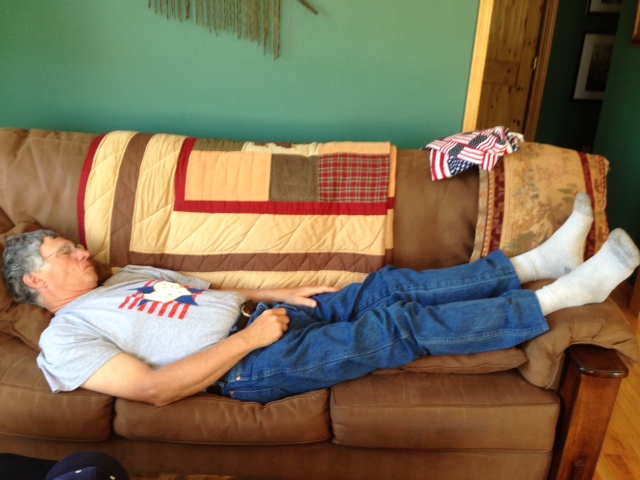 While resting and holidaying at Charlotte's in Gardiner, Duane called with the idea to modify and strengthen the original Buggy - new axle and wheels, pole holders, stabilized front wheel, etc. So, on the most recent Saturday, we drove up to see Audrey and Duane, then put the Buggy in Duane's truck and carried it out to the Duncan Colony. Duane had already made some improvements on the rig and purchased a 1/2 inch rod to be made into a new axle.

At the Duncan Colony, I eventually found Gary Waldner, the welder-blacksmith. Gary looked over the Buggy and said he could make the changes when new wheels with flat-free tires could be procured. (I like flat-free better than fat-free.)

Tires were ordered from Marathon Tires in Kent, WA. Gary will make the Buggy road-worthy in short order after they appear in Harlowton Thursday.

The Amity-Unity Tour should re-commence next week with occasional blogs to follow.

Best Regards from the Montana Walking Man.
Posted by Dr Bob at 12:33 PM No comments: