The idea that, “All the world is a stage,” is attributed to Wm. Shakespeare. 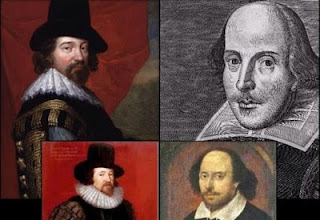 But, you might be interested to know that Shakespeare was the pen name of Sir Francis Bacon. The stage was for centuries looked down upon by many, often the upper class. While holding a number of positions in the government of Elizabeth I, Bacon had to be careful about how and where he exposed himself to the public.

At the same time, he had early in life decided to take on “all knowledge as my province.” Numerous works flowed from his pen while he helped shape the English language along the way. But, writing dozens of plays and sonnets in the name of Shakespeare may have contributed more to posterity than most of his other explorations.

Yes, there was a William Shakespeare. An actor who had traveled little in his life and died penniless with a handful of books in his home. How and if Bacon ever interacted with him in real life is not known? We do know that many thinkers believe that that William Shakespeare was for many reasons incapable of producing the works put out in his name. Even upon modest research, it appears that Francis Bacon is the Real Shakespeare.

The works attributed to the name of the “Bard of Avon” cover broad arenas of life in England and the Continent even back to the days of Julius Caesar. That stage was wide and spacious touching on the lives of numerous real and imagined kings and commoners in tragedies and comedies. What “Shakespeare” has put before theater for four hundred years mimics much of our own lives.

How can that be? Ah, because “All the world’s a stage, and all the men and women merely players. They have their exits and their entrances. And one may in his time play many parts. His acts being seven ages.”

For the audiences of his day and ours, the author wrote of those ages being infant, schoolboy, lover, soldier, justice, elder, and dotard.

But, much more can be inferred from this quote from As You Like It than you might think. It may be viewed from beyond the perspective of one lifetime, if we dare. Dare we?

Seven ages refer in a broader sense to the rounds of life through which humanity passes in the course of evolution. Humanity as a whole passes through great stages like those from infant to dotard. The Ageless Wisdom teaches that we are in the fourth round of the seven which all cover eons of time. Within this fourth round, humans presently compose what is called the Aryan Race [not to be confused with the Aryans which the Nazis considered themselves]. This fifth race – which is intended to perfect the principle of mind – of our round was preceded by the Atlantean fourth race. It will be superseded in coming millennia by a sixth Race which will be advanced as far beyond our own as we have passed the Atlanteans. Can you imagine that?

In between the ages of one human lifetime and passages for whole races stand those individual lives through which each of us are obliged to pass. We all have our own seven ages and rounds stretched out over vast periods of history. This one lifetime spent largely in one land for sixty, seventy, eighty years in one body is like a pearl on a great chain. Yet, it makes for a wondrous and awesome aperture through which to look for those with the eyes to see or the hearts to imagine.

Many are led to believe that we will pass from this one life – however imperfect our expression has been in it – to sit in heaven on a cloud for eternity. Such is hardly the case. We are told, even in Christian scripture, that “ye are gods” and enjoined to “be perfect as the Father in heaven.”

Well, that sounds like a tall order for all of us and especially for those who can barely balance a checkbook or even hold a job in order to pay a bill. But, such is the case as in the larger scheme of things each soul living through one [or part of one] of those ages in his/her present lifetime: infant, schoolboy, lover, soldier, justice, elder, and dotard.

Let us dare to look, at least for moments, beyond this embodiment. And then, look forward to those ages which lie ahead. Along the way, let us also begin to do the “greater works” which we must eventually accomplish.

PS. For readers with astrological inclinations, the horoscope of Sir Francis Bacon shows quite clearly that he was a “Spear Shaker.” 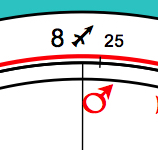 For another angle on the Spear Shaker, visit http://www.redicecreations.com/specialreports/2006/05may/spearshaker.html

append comments below or send to theportableschool at gmail dot com